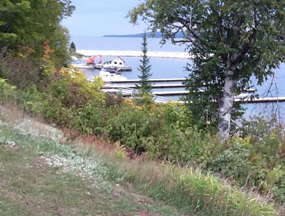 As a part of the harbour improvements ongoing in Meldrum Bay, ON, the main dock, which is badly rotten, is going to be rebuilt. Sadly, this involves the demolition of the iconic freight shed, originally built in 1935.  Though considered by many as a heritage building, it was deemed too costly  a job to try to save it, as parts of it, as well, had rotted, and the windows cut into the walls by one of the previous  marina concessionaires, it was thought, had weakened the structure.
In the days when everything came into and out of the village by boat, freight would be stored in the building awaiting shipping, or was off-loaded into the shed for retrieval. Ivan Trick, when he was the keeper of the village general store, would get a shipment in November of enough canned goods and staples to last the people of the community until supplies would arrive with the first boat of the shipping season the next spring; so  he would make many trips back and forth from the shed to his store to stow away the mountain of supplies.
When the North Channel became popular for cruising, the building housed the Canada Customs office, and the Harbour Master did double duty as Customs Agent. The marina office was set up in one corner of the freight shed, and the area where cargo once sat waiting for shipment became a lounge for boaters. On nights, before the construction of our breakwall in 2009, when a wicked Nor'easter would blow up, boaters often sought refuge from their tossing vessels, sleeping on the floor of the lounge.
On a personal note, the freight shed has been the focal point of the view from my house for the 27 years that I have lived here. As I write, I can hear the sound of chain saws, and the crash and splintering of the old wood as a crane tears the heritage building apart.
Respectfully Submitted,  Port Captain Elizabeth Durham
Tags
General News and Events

I had the same experence about the same time -- sawdust and all.

Who can remember the old ice house? I last bought ice there in July 1978(?) Cut out of the bay the previous winter and still covered with saw dust. Truly part of the old "frozen water trade"

That iconic building is forever etched in our memory as the first ever Canadian port we entered from the States many years ago. One of our favorite pictures is our boat flying its brand new Canadian courtesy flag berthed next to that white building flying the real thing. Thanks for the memories.

Please post some photos when the new docks are installed.