The 2011 Wilderness Rally was held July 27-29 in Keyhole Harbor at the western end of the Collins Inlet, approximately 7 nautical miles east of Killarney. It was, by all objective criteria, a rousing success. Twenty eight boats attended the Rally, down a few from past years. In part this was due to lower traffic in the North Channel. In addition we had some last minute cancellations caused by a variety of personal and family matters. (But that is cruising.)

Of the 28 boats that were present, 8 attended their first ever GLCC event. And of those 8, one just happened to be anchored in the south part of the harbor, and, after getting a glimpse of what was planned, decided to join the group. In addition, 3 of the boats had adult children and younger (of course) grandchildren on board, the youngest being Secretary Phil and Althea Doolittle’s 18-month-old granddaughter.

Much of the credit for the Rally’s success goes to the weather. It was, in a word, spectacular. The sun shone brightly every day (obviously no rain, although some was earlier predicted) and we experienced none of the heavy winds that several previous Rallies had encountered. Finally, and most importantly, the people who attended were a congenial group who enthusiastically participated in all of the scheduled and unscheduled events.

The party began a day early, on the 26th, with an informal happy hour on shore for the 12 or so boats that had arrived a day early. On the 27th the Rally officially opened with a repeat of the shore happy hour except (1) this was a planned event and (2) the full complement of boats attended. Earlier in the day, a group of 6 dinghies went exploring, to check out Winakaching Bay, led by Jim and Bobbi Wooll of Reverie and Ron Dwelle and Jo Schneider of Annwfn.

The next day saw 3 events. First the annual dinghy races, this year skillfully coordinated by Harold and Sue Darch on Vision. (Ted and Venetia Moorhouse—Fairytale—had to relinquish the task in order to return their daughter, son-in-law, and 3 grandchildren to Little Current. But they returned in time for the hotdog roast.)

Also during that same time period, for those not participating in the races, the “Crafts Group” organized by Jo Schneider on Annwfn and hosted on Gunkholer by Dianne Hansen got together to compare notes on knitting and other crafts and just enjoying each other’s company. About 8 people joined the group.

In the afternoon we had a combined book exchange (run by my commander-in-chief Susan and Ann Lloyd Poranto on Kahlua III) and a “show and tell” ideas and gadget exchange on shore. 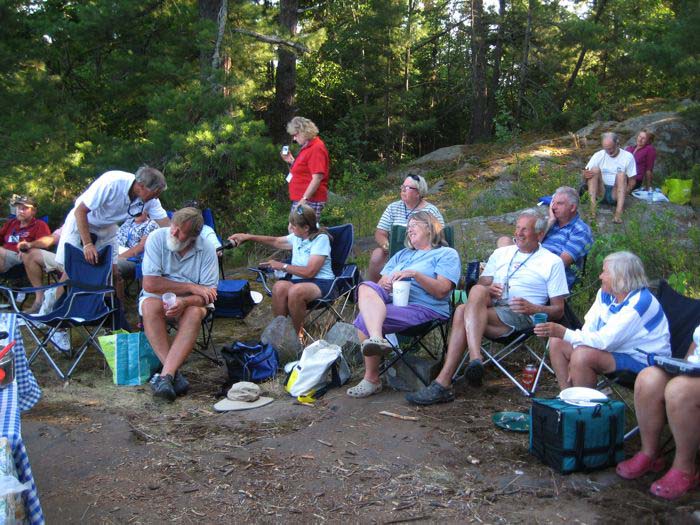 But the main event was the Floating Cocktail/ Party/Happy Hour. My wife and co-Rally Chair Susan, was able to convince (commandeer?) 7 boats to host no more than 2 or 3 other couples on their boat for a small happy hour. She spent a great deal of time assigning individuals to the host boats, the only criteria being that the people were not allowed to choose a host boat if they knew the hosts. This was the fourth year for this event and again it was extremely successful. It provided a unique opportunity for people to really get to know each other in a small and relaxed settting. Indeed, the happy hour on a number of boats lasted well into the dinner hour.

The last day, the 29th, began with a trip to the Killarney Provincial Park, led by Craig and Day Olney on Toucan. This was about a 4 mile dinghy ride west from the anchorage. Once at the park, one could dinghy up the Chikanishing River, dock the dinghy at a canoe livery drop-off, and hike the trail that runs south along the river to the bay. Or (as we did) go back down the river, beach the dinghy there, and hike the trail north. Again the weather cooperated. The westerlies didn’t kick in until later in the afternoon, when everyone was either heading back east to their boats or had already returned. For those not going on the dinghy trip, the “Crafters” resumed their activities. Others went kayaking or just relaxed and enjoyed the ambiance of Keyhole Harbor.

The activities for the day ended with the traditional hotdog roast. The hotdogs, as always, were contributed by Rear Commodore Bud and Shirley Zalon on EZ Baby. Unfortunately, Bud and Shiley had to return to Duncan Bay after the Rendezvous, but Director Chuck and Joanne Mead—Blue Horizon—were kind enough to transport the hotdogs to the Rally. Ron Dwelle—Annwfn—was again chief fire marshal, responsible both for making and dousing the fire. Ron was ably assisted by Jorma Poranto on Kahlua III, Chris Hansen on Gunkholer, and Bruce Arthur on Okaga. Everyone ate their fill of dogs as well as the extraordinary side dishes and desserts contributed by the “Rallyers.” Finally, to top off the evening, Secretary Phil Doolittle presented Jorma and Ann Poranto—Kahlua III—with their 25th year membership burgee.

We left looking forward to next year’s Rally, destination yet to be determined, but more than likely to be held somewhere in the Georgian Bay.